Two questions:
1. Any rough idea when this thing will be back in stock in the EU-store?

2. If I decide to upgrade to the Gunfighter (or a similar stick) at some point, can I simply get a new adapter plate and keep using the mount?

^ VKB's US store offers these universal and stick-specific adapter-plates for the Stronghold, but I can't seem to find them in the EU store... not even a category for them where they would be listed as "out of stock" ...

I also would like a VKB desk mount for my NXT EVO, what triggers them to be restocked?
Top

From what I've been told, the current shipment (which includes UCM-S-GLs) is in the NL already but sitting in customs, waiting to get cleared.

The shipment which was expected to arrive on the 1st of June, is that right?
Top

That should be the one.

Just FYI: Yesterday was a national holiday in the NL, so that could add more waiting time. Not sure how fast customs usually work, but if the stuff is in the NL already, it can't be that much longer..... right? Right?

Probably unrelated, but a Dutch buddy of mine is waiting for a new grip from WinWing which has been sitting at Schipol airport /customs for days and days now, with Fedex giving him an "unknown delay" status. Perhaps the Dutch customs-officers are too liberal in their use of certain confiscated substances?

I've not seen any Mount Combos for Gladiator Mounts, is that right?


I was about to make my first order and get some VKB Gladiator Evos.
If I get the SEM, will it be a problem, if the stick is mounted to the standart Gladiator Mount or do I need to get any inforcement?


I guess I will wait for the Mounts to restock, seems like it could happen any time, then I will finish my purchase I guess

Sorry for the Offtopic!
Top

Not sure I understand what you are looking for, but there is this combo built around the Gladiator mount: 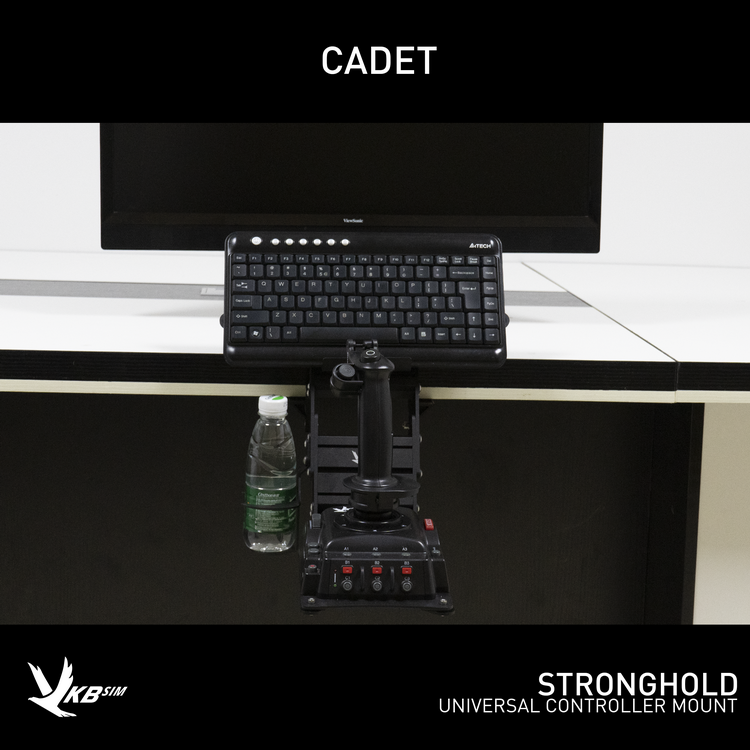 Or do you mean something to also mount the NXT button-/axes-modules? Not sure if VKB currently have a solution for that.

Thanks,
I saw that pretty late, was hoping for 2 Mounts in a bundle, same as the Gunfighter one.

What about having the SEM attached to the Controller, is there any problem? Since the SEM would have nothing underneath, I'm worried about if I press a button too hard or let the weight of my arm on it.
Top

Not sure if it'd be a good idea to have those things dangling off your stick while it's mounted.

I guess the GNX MODULE TO GLADIATOR NXT BASE REINFORCING PLATE will do it's job then, thanks.
Top

You guys must be working overtime... re-stock notification came at around 23:15h. Luckily I was still up to place my order..

Now that it's been hanging from my desk for a while, I guess I wouldn't be doing my job if I didn't comment on the UCM-S GL here. 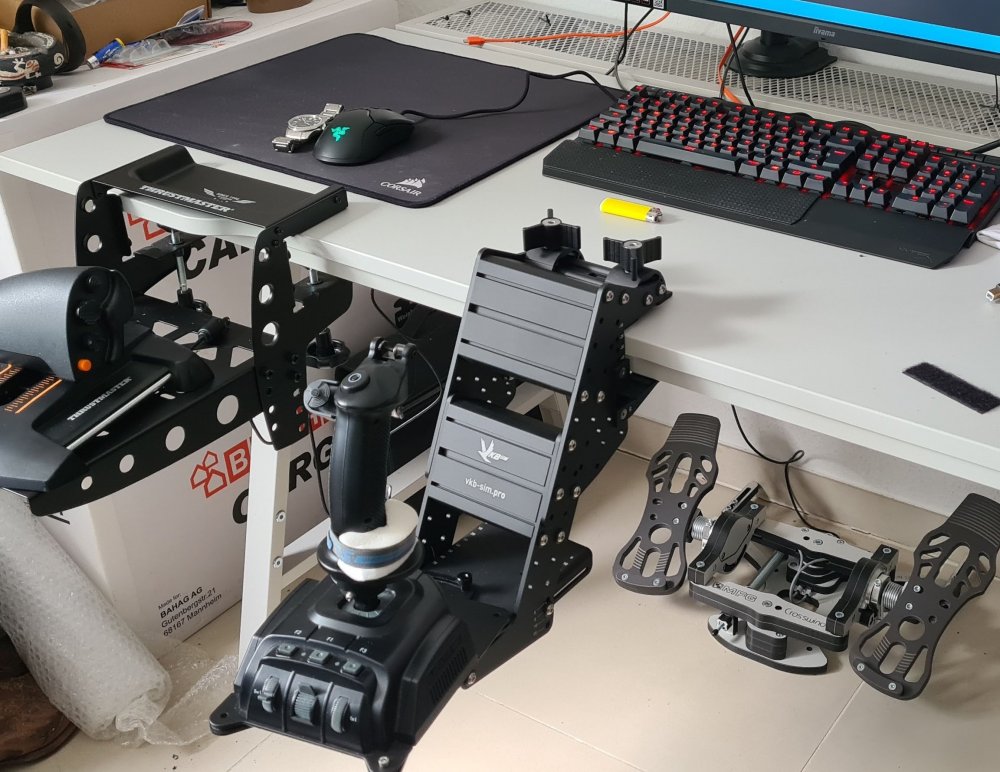 This thing is pretty amazing. Super solidly built, well constructed and it's even quite nice to look at - at least through my flightsim-nerd-goggles - not sure what normies would think ..

Compared to the TM clamp I use to mount my throttle, I can definitely see why there is a 100% price difference between the two. The VKB's plates are much thicker and its surface treatment is quite a bit nicer than the lacquer (probably?) on the TM. Both work fine at what they do, mind you, but the VKB feels like a mid to high- end product whereas the TM feels more like entry- to mid-level. Stability-wise there's not much between the TM and the VKB - both feel super-solid once the clamps are tightened down. Then again: Using the TM for the TWCS throttle probably puts way less stress on the TM mount than what the Evo puts on the UCM. Worst way of looking at it: The VKB is overbuilt - at least for the Evo with #30-springs on the Y-axis and #20s on the X-axis.

The VKB's clamp had me a bit worried WRT ease of installation/removal, since I do have to change the mount's position on my desk regularly. But the simple trick of "inverting" those clamps (compared to most other mounting systems) really is a quite clever design-decision and means you can loosen, re-adjust its position and then tighten the mount back down very quickly. It also has the added bonus of working flawlessly on desks with a steel frame underneath the desktop near the top's edge (like mine does).

All in all, I couldn't be happier with this purchase. It does what it's supposed to do by bringing the Evo into a center-stick position which makes flying feel much nicer to me. The "twist" function via the rotatable GL-plate is a great touch and was the main reason why I decided to wait for the VKB instead of getting a Monstertech. And now I'm glad I waited. Mounting the stick dead-straight feels just less comfortable than rotating it over to the left as far as the mechanism allows.