Thank you! But, never say never...

Haha, well, since I already have the ultimate Gunfighter MKIII joystick with 20cm extension and the rudder pedals, i'm looking forward on buying this whole setup:

After that I'll build my simpit

After 4 or 5 years waiting, we can see the dawn light.

I nearly forgot this product and happy to see the metal grip is on shipping.

It's funny to see the MKIII grip pack is nearly 600 usd on online shop, did it rise over 20% price in past 2 years?

As I remembered it's about 500 in the past, then I noticed it's the UltIMaTe PRO MeTaL AwEsOmE gRiP.

Thxxxtmxxxxr will feel pain and face the dangerous right now.

I've never seen that render before, Robert. Is it from Reddit or something? When was it posted?
Top

That's the old render from Dec 2017. This thread has the most current real photos.
Top

If TECS is dead in the water in any regard, it'll either be because:


a is pretty unlikely, I suspect they've sold a few Gladiator NXTs recently
b is not impossible in and of itself, but it would be a pretty perfectionist (AKA foolish) company that would cancel the base model (which, lets face it, any decent peripheral manufacturer could manage; hell, even TM managed to make a decent fist of the TWCS) just because they couldn't produce their higher tier models. They wouldn't even have to mention the cancellation of the models with the electronic detent, they could just say "Here's the base model, we're still working through some stuff for the other models"
c frankly is the most likely of the three. From what I've seen of this thread, if I was the main human at VKB, reading this thread, I'd be tempted to say "Fekk 'em and their whiny asses, they don't deserve our genius"!

It's not going to be down to the chip fabs not being able to keep up.

Just for a second, put some actual thought into it. They're knocking out Gladiator NXT's just fine. What would be in the base model that wouldn't be in the NXT? No electronics for sure, the sensor will just be one of their MARS sensors, switches and buttons, eh they're still available. A throttle is a device just like a joystick but with one main axis instead of two.

What magic sauce would be unavailable for the throttle that they don't already use in the NXT or even the Gunfighter bases?

And yes, probably some of it is also due to VKB being their perfectionist (but not to the extent as option b) selves. That's why their kit is as good as it is.

This thing is so late at this point, and especially given the confidence of the announcement at the start of this thread, that I suspect something has gone wrong between then and now.

My guess is issues with the Chinese.

Winwing have been eating VKB's lunch the last year or so. It's possible there are resource issues at VKBs primary integration CM as a result.

Alternatively, it's likely that a high degree of hand-holding was necessary with the CM, or one or more of their suppliers (mechanical, electrical/electronic, pcba, etc). This is fine when you can freely travel, but definitely problematic if you cannot. I have direct experience of this: you have to be there, looking at what people are doing, asking questions, having lots of 1-1 personal chats, otherwise you have no idea what is going on. You think everything is fine, the first batch arrives, and it's dogshit. Not only that, but your mfg cost is 200% what it was supposed to be. This is particularly a problem in east Asia and particularly a problem in China. It's possible to overcome these problems, but you need some very special skills and experience, and good leadership across the organisation. And some luck with individuals in key roles.

Component shortages are affecting everyone right now, some sullpiers are quoting 18 month lead-times for common use ICs (MCUs, FPGAs, etc) but there are parts to be had if you're prepared to deal with the spot market.

I have no idea what VKBs relationship with their CM(s) is, or how the supply chain looms. It is likely complex, and difficult, to find alternatives to. It could be that this will sink them in the end if they don't find a strategy to deal with all of this.

On the other hand, I kind of get the feeling that VKB is a bit of a hobby project for some talented engineers, and if that's true, we should just all chill, it will be fine by 2025 (probably)

milo1973 wrote:.....
On the other hand, I kind of get the feeling that VKB is a bit of a hobby project for some talented engineers

Could you explain?
Top

The implication seems to be that VKB are just messing around in a shed with a couple of drill presses and a soldering iron but also the owners are so rich, that if a product fails, or even the company itself fails, the owners will just be a bit sad, shrug their shoulders and go back to complaining that their swimming pools haven't been topped up with champagne often enough!

I notice he didn't answer my point about the NXT being so successful both in it's brilliant implementation but more importantly how relatively easy it is to buy one because you guys are doing such a good job of manufacturing them in high volume.

His main point seems to be that he thinks you guys are ready to drop the TECS as a failed experiment. That seems unlikely to me, given the importance of you chaps having a throttle offering to complete a full setup and that I'm pretty sure VKB could manage to produce the likes of the TECS base model before VKB's first morning coffee!

...a hobby project for some talented engineers

To me, this translates to a dream job I WISH I had. But it's also unfair. Outside of a few extremely dedicated (one might say obsessive) individuals, most "hobbies" don't scale to production, inventory, and multi-version configuration management backward compatibility during revisions. I've designed, redesigned, discarded, kludged, unkludged things for myself and my space-flight sim hobby. But if I had to reproduce it for many many others...I don't know that I could, even after lessons learned.

[I admit I've considered the 'bespoke car seat / flight sim rig conversion' assembly and design 'job' as a fun way to make some retirement income...but I suspect the market of people willing to buy what I'd have to charge to make anything is small, and among them most would rather DIY themselves, too. I'm kind of switching subjects though...]
RH: VKB GF Mk III + Modern Combat Grip *ULTIMATE* (12/17 GFII w/ upgrade kit)
LH: VKB GF Mk III + Kosmosima Prem (4/2019 GFII w/ upgrade), mounted *laterally* as throttle
Feet: Slaw Viper RX Pedals [Sorry, VKB, too gorgeous to pass up]
Top

milo1973 wrote:.....
On the other hand, I kind of get the feeling that VKB is a bit of a hobby project for some talented engineers

Sure. Based on the likely BOM and material costs, I think the margins are not super high, but enough to run a pretty good business. VKB don't appear to cut corners or rush things. So it could be that this is not the only thing their core team is doing. That would not be at all unusual..

Well I'm giving up, I find it disappointing that VKB chooses to let their fan boys do their talking for them instead of providing the patient community of buyers with a basic update, even a high level one.... NOTHING....

My TM16000 is getting worse by the day and I need to replace it, so I don't think I'll waste anymore time here and just bite the bullet for a Virpil throttle. Too bad as I would have preferred to have a full VKB setup to go with my stick and pedals instead of mixing up the hardware.
Top

rtrski, that is a fun idea. A car seat for babies with a HOTAS built in.
Top

Thanks for the laugh, but I meant a full automotive seat vs an office chair...
Not the most recent pic, but fairly representative: 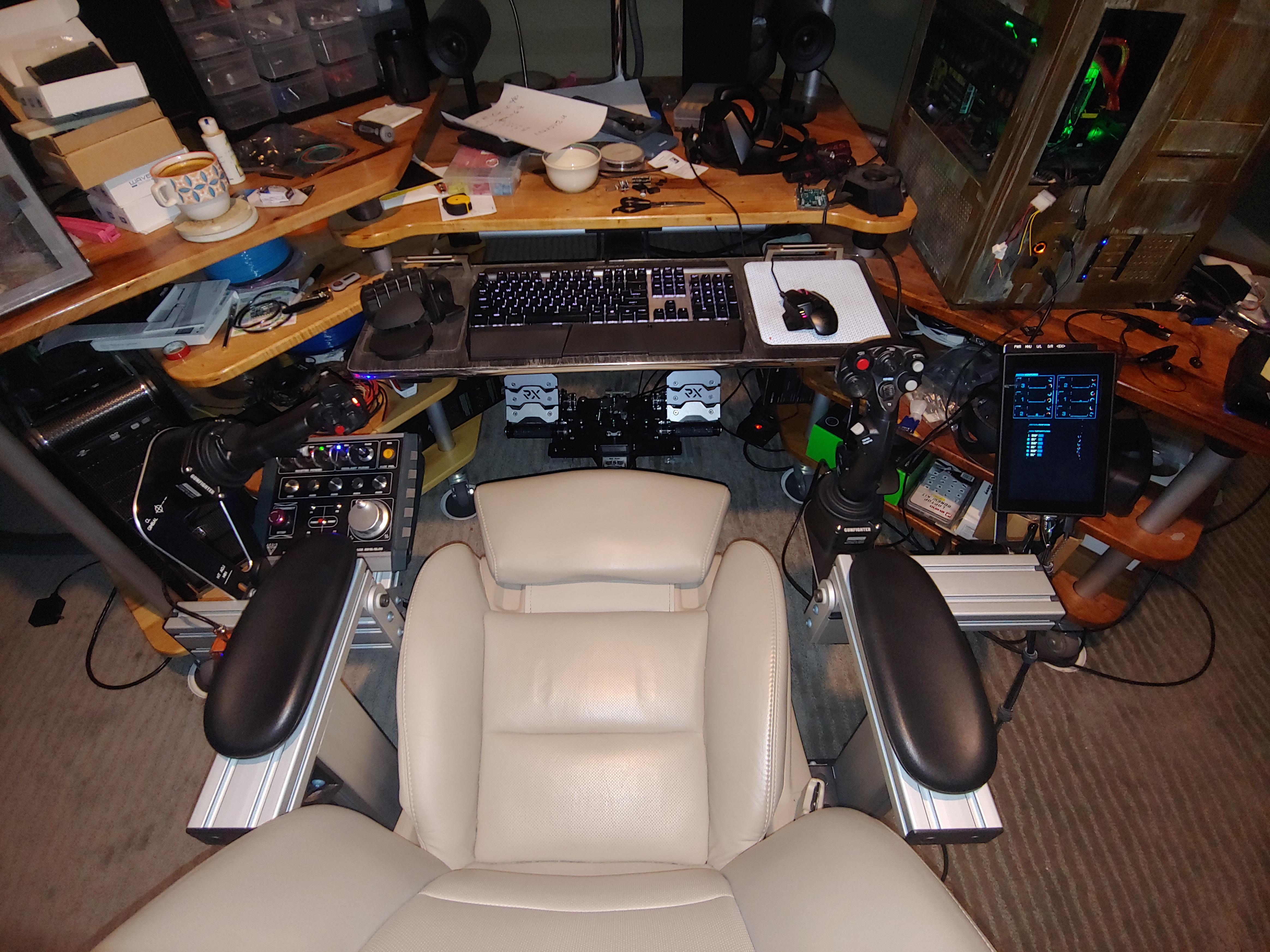 Nomad_AC wrote:Well I'm giving up, I find it disappointing that VKB chooses to let their fan boys do their talking for them instead of providing the patient community of buyers with a basic update, even a high level one.... NOTHING....

My TM16000 is getting worse by the day and I need to replace it, so I don't think I'll waste anymore time here and just bite the bullet for a Virpil throttle. Too bad as I would have preferred to have a full VKB setup to go with my stick and pedals instead of mixing up the hardware.

I'm not sure why you feel the need to see this in emotional terms and insult those of us who have kit that will see us out and don't feel slighted by a company who can be a little perfectionist to a fault and then become affected by the pandemic, further delaying their product.

@Nomad_AC do it, I feel you won't regret your decision! I took the plunge 10 weeks ago and every week that passes reaffirms to me that it was the right decision in my situation (I was sick of my current HOTAS setup).
Top
Post Reply
333 posts

Users browsing this forum: No registered users and 2 guests